Skip to content
I like travelling, beer and food so I thought I'd blog about it. Any times, prices or other details quoted are only correct at the time I was there – they may be the same when you read this, but they may also not be!
Polish beer cycling doncaster craft beer recipe CzechRep brewery Spanish beer beer Belgian beer German Beer Leeds beer festival customer service pubs French beer tourdefrance Trappist Czech beer curry

Yesterday, I visited the Bermondsey Beer Mile (here’s a map).  I’ve heard a lot about it so thought I’d see what all the fuss was about.  For the uninitiated, much of the railway line out of London Bridge is built up with arches underneath.  Some of these arches are road and pedestrian tunnels but most are small businesses – including a number of breweries and beer ‘places’.

I followed the route the opposite way round to most of the maps, so jumped on a train to South Bermondsey which was ‘interesting’ as Millwall were at home and that’s the nearest station to their ground!

I missed out Fourpure – sorry guys!  Nothing against your beer but you’re slightly off route and I was already pushed for time, so first stop was EeBria to try a couple of beers from Orbit as they had a tap takeover.  Good beers, reasonable venue and had a nice chat to Orbit’s brewer.

Next stop was a few arches down at Partizan.  I like their beers generally – a good selection of styles and aren’t afraid to do crazy things with fruit, herbs and the like.  However, first grumble of the day – they only served beer in two-third pints.  I didn’t want two-thirds – I wanted one-third.  What if I wanted just a half.  No – I had to drink the measure they wanted me to have.  I still had one though and took away a couple of bottles.

Moving on, next stop after the longest walk on the route would have been Kernel, but they no longer open as a tap, only as a beer shop and close at 1400.  The reasons are on the picture shown on Stonch’s Beer Blog.  More about Stonch’s beer blog later…

Not too much further was Brew by Numbers.  I was looking forward to visiting there as I like their beers but unfortunately, and grumble number 2, was the queue.  Yes, it’s great that they’re doing well and people want to visit, but a queue that was snaking out of the brewery and had at least 40 people in it was crackers.  There weren’t that many staff serving so it was moving very slowly indeed, so I opted just to get a couple of bottles to takeaway as that had a separate queue.  If you’re always that bust, and I’m told you are, then why not do something about it?  Put extra staff on; become ticket only; do a Kernel and not open at all.

On the opposite site of the railway but via a walk via the nearest tunnel, was UBREW – a different concept with them renting out small scale brewery equipment, space and expertise to allow budding brewers to pop along and brew their own beer – home brew I suppose, but not at home.  They did have some of the bottles brewed there on sale, but they weren’t priced.  The draught beer were all brews from elsewhere and a repeat of grumble 1 – beer only served in two-third pints. 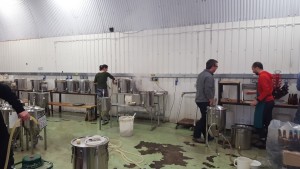 and on the home stretch was The Bottle Shop.  They had a really good selection as well as Moor beers on draught (tap takeover) along with a few others.  Good news as they offered beers in sizes the customer wanted, apart from the really strong ones which were only available in smaller measures.  One beer I chose only had prices for half and pint, but they were happy to serve me a third – thanks!

A couple of doors down is the Anspach & Hobday brewery.  Again, beer in whatever measure you wanted and I opted for three thirds as there were some really exciting sounding beers – I had Experimental IPSaison, Sour Dryhop and White Coffee Milk Stout.  If you’d closed your eyes and drunk the latter, you’d have sworn that it was dark!

Last stop was Southwark Brewery.  These were a bit different as most of their beers were cask – nearly every other 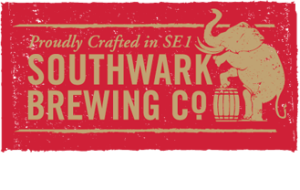 during the day had been keg.  Again, beer in any size the customer wanted and plenty of space to sit down.  There was something about Southwark though – it was so much more chilled than most of the other venues.  Their beers weren’t necessarily the best – I’m not saying they were bad but the quality everywhere was good but for me, a good beer experience is not just about the beer – it’s about the venue, staff, ambiance, toilets and so on.

As Stonch said in that blog post – ‘beer bloggers Boak and Bailey reported on this phenomenon, quoting beer enthusiasts whose noses have been put out of joint by “boozy stag dos” and “huge groups of lads getting pretty drunk”. I’ve done the Mile twice, and on both occasions that was certainly our game: getting hooned up on a sunny day’.  Yes, I saw all of that, along with people who were just ‘there’ – they clearly there to be seen.  In one venue, a tweed jacketed youth came in with two pretty young women – only he had a beer and at that didn’t really didn’t seem to like either.  They had no interest what so ever.

So – would I go again?  Maybe.  Bearded hipsters I can put up with.  People who don’t really enjoy being there I can’t.  Brewers / shops – employ extra staff if you need it and serve beer in glass sizes that people want, not that you say.